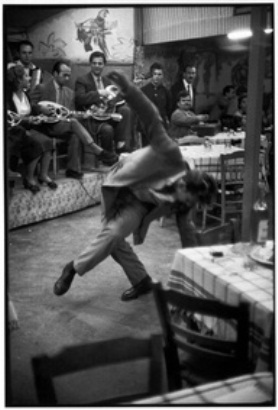 The Greeks know a thing or two about hardship, and not only since the fairly recent days of financial ruin known as ‘austerity’. Long before the clawback of an inflated ‘jobs for all’ civil service, European-style standard of living and lifestyles powered through tax evasion, the Greeks lived through and survived 400 years under Ottoman rule, starvation and civil war in the 40s, dictatorship in the 70s and, before tourism exploded, a rural economy eeked out of a dry, rocky landscape. A land of villages, the people worked hard, a peasant lifestyle of early dawn risings and making everything from scratch.

As a child of Greeks, I saw the life firsthand over six visits spanning my own lifetime to date. The first visit was a milestone: my mother’s family bought their first fridge (sea foam green) to make our visit more comfortable, though they quickly caught on to the joys of cooled water in the sweltering summer heat. Over the next few visits, new conveniences appeared – a T.V., indoor plumbing, cow’s milk for the kids, although my grandmother and uncle continued to prefer the pungent fresh milk from the family goat. Things changed. But the hard work didn’t. My family – olive and orange growers – continued to rise at dawn and disappear for hours on end, tending the fields. At home, my aunt and grandmother washed, cooked, gardened and did whatever one does to and for the animals out back: goats, chickens, pigs, sheep, a donkey. Over time, the donkey was replaced by a VW van, but the other animals remained as the food source for the family, despite the appearance of a new supermarket on the road to the city. During my visits, I always felt quietly ashamed of the hard work going on around me while my own satisfaction and comfort seemed to remain paramount to the family. You spoiled, lazy North American, I thought. I knew my relatives didn’t hold anything against me, though. I’d heard them talking and knew from the almost pitying way I was sometimes treated that they felt we North Americans simply ‘didn’t know’. What we didn’t know about, I wasn’t exactly sure. I guessed it was the curse of the good life, so removed from the sources of our bounty in Canada. And the back-breaking work.

Meanwhile, I began to realize there was something else I didn’t seem to know about. The Greeks have a secret to temper the travails of life and their own cynical and skeptical nature. It’s called kefi. Kefi is a Greek word of course, and not well known outside of Greek circles. A good definition I found sums it up like this: “The literal translation of “kefi” is “fun”, but that really doesn’t describe Kefi. Kefi is spirit, triumph, joy, adrenalin…” You see, the Greeks know the secret to surviving austerity. They built a midday siesta into their workday, not only for the villagers who worked the fields but extending to the offices and stores in the city that closed down between 2pm and 5 pm daily. Want to buy something? Too bad. Go to sleep for a few hours and come back later. Most nights, the Greeks gather up their families and go out for coffee, ice cream and gossip in the restaurants of the open air squares, often returning home after midnight with the kids fast asleep in their arms. And then of course, there’s serious kefi that happens in the bouzouki clubs where men and women dance the zembeikiko (a soulful solo improvised dance), eyes closed, arms out, entranced by the lamenting music like dervishes.

Perhaps you’ve seen the movie Zorba the Greek? Watched Zorba teach his British employer and friend how the Greeks deal with pain, loss, failure and hardship. “Dance, boss, dance!!” Zorba shouts as he takes off to dance away his troubles on the beaches of Crete. I have relatives and expat Greek friends here in Canada who have all but given up on the old country. They blame the Greeks for their current predicament and shake their heads in disgust. “That’s what you get when you don’t pay your taxes! I was there last month; nobody’s got a job but the cafenions were all full, day and night! People drinking their frappes (iced coffees) and smoking their cigarettes, oblivious! Whose going to pay for that? When are they going to wake up and grow up??”

Good question. Meanwhile, the Greek secret to survival lives on, stronger than the tyranny and deprivation they’ve known for centuries. It’s called kefi.